San Francisco in a day

We unhitched the trailer and left it at our site in Half Moon Bay and drove into San Fran.  I didn't know it at the time but Tyran was very nervous about driving in the city.  We had found a reasonably priced garage to park the Durango but it was pretty much right in the middle of everything.  Thank goodness for GPS we got to the garage safely and then began our journey on foot.

We walked a couple of blocks to Union square where we knew we could purchase trolley tickets.  We had to wait in line for a good 15 or 20 minutes to buy them and we bought an all day ticket which, it turns out, we didn't need.
Once we got the tickets we realized that the trolley's were jam packed and that if we wanted to get anywhere quickly we would need to keep hoofing it around the city and hope to catch a trolley that was less crowded as we meandered around.

McKenna really wanted to see "Chinatown" so we check the GPS and headed out.  On our way we  saw a huge Cathedral so we decided to stop and check it out.  It was Grace Cathedral and it is Episcopalian.  I always thought that only Catholics had cathedrals.  Learned something new.
It was a beautiful building I would love to go back and take pictures of the inside.  Seriously, the stained glass windows were incredible.

There is a labyrinth that is outside in the courtyard (and I guess there is one just inside the cathedral as well and they do yoga there.).  So Ty and the kids decided to take some time and walk the outside labyrinth.  If you are wondering about why people walk labyrinths you can go HERE
Once we were done there we made our way into Chinatown.  It was very cool.  Listening to people speaking in another language and seeing a slice of a different culture was very neat. 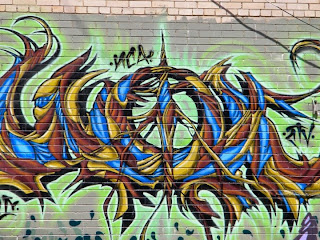 It was in Chinatown that we caught the trolley so that we could make it down to Fisherman's Wharf.  It was still pretty crowded and we had to sit on the inside of the trolley but that was okay. At least they can say that they rode one!


We made it down to the wharf.  We were heading there to go to the aquarium (which will be a post by itself).  It is a really fun place full of people to watch and shops to buy from. 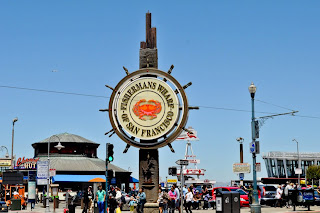 After our trip to the aquarium it was time to head back to get the car.  We had to be out of the garage by a certain time or we would end up paying more.  When we went to find a trolley to take us back up the hills we found the line to be probably an hour to two hours long!  It was crazy.  So we hiked the hills of San Francisco.

Which was cool.  I got this shot of a trolley coming up the street with Alcatraz out in the Bay.  My cousin actually was able to get the photographer out of this shot for me but I didn't have time to find that picture so you get the one that has the guy in silhouette. 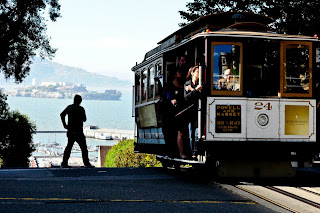 It was actually the next day that we drove across the bridge but I figured I would put the pictures in this post.   This was another time that was not one of the best moments on the trip.  The kids wanted to see if they could hold their breath as we drove across.  Well Tyran almost made it but the kids, of course, didn't.

Jillian kept on insisting that she had held her breath the whole time and when her brothers and sister refused to believe her she went into a funk.  She did not want to get out of the car to have her picture taken at all. 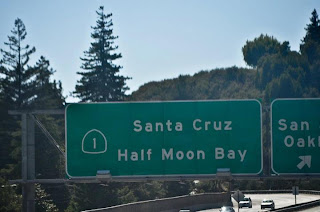 Our next stop was Half Moon Bay.  This was the day that it was SO incredibly windy.  We got there and got the tent set up.  As we were checking things out I noticed that they had animal proof garbage cans throughout the camping area.  This was basically right next to the beach so I was a little confused.  Why would they need these types of garbage cans?  Did they get bears around here?  Were the seagulls extra aggressive?

We got things set up and George REALLY wanted to try out the wet suit and the Boogie board here on this beach.  It was only in the 50's temp wise and I tried to dissuade him but he was going to do it.  So he put on the wet suit (which I think that George thought the wet suit was going to make it so he wouldn't get cold) grabbed the board and we headed down to the beach.

I do have a video of this valiant attempt.  It involves George hitting the water, going for one ride and  screaming like a little girl.  It was pretty awesome.

That night we learned why they have the animal proof garbage cans.

Because of the garbage cans I suggested we put all of the coolers in the trailer and tarp it up, which we did.  Sometime in the night I awoke to the sounds of something messing around our camp.  I wasn't sure what it was but I was but whatever it was there were more than one and they had started fighting.  Ty woke up as well and we said a few things into the dark in hopes of scaring them away and we went back to sleep.  The next morning when I went to get into our food coolers as I was pulling the tarp off of  the trailer I noticed that there was bread and cereal everywhere.

It turns out the the campsite is home to the Long Tailed Weasel ( NOT a ferret as I first thought!)
These little critters had gotten up underneath our tied down tarp and into our bread cooler.

We spent a time on the beach just walking.  It's a GORGEOUS beach!  Ty said that he wouldn't mind going back there and spending an entire week just at that beach.  I would have to concur.

This is what it looked like on the day that we left. The clouds had rolled in and it was overcast and a little morose but still beautiful! 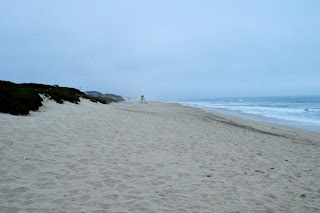 Tomorrow....San Francisco in one day.

Plaskett Creek is a beautiful campground.  I think most, if not all,of the sites there had lovely green grass and trees.  It was super quiet and peaceful, even with a youth group playing games about half the camp ground away.  It was like the trees just absorbed the sound.  SO beautiful.
We did get in trouble for stringing up clothesline between two trees though.  We got it up and almost immediately they informed us we had to take it down.  So we put up a ladder and draped our towels and wet things over that and on the bars of our tent.

One of the things that Ty wanted to do was to watch the sunset into the ocean.  I thought that this was a fabulous idea so that evening after dinner we went across the PCH (which isn't very busy in that area) and down to Sand Dollar Beach

It was a really neat experience to sit on the rocks and watch the sun sink into the ocean.  The part where we were sitting was very rocky.  But the rocks were round and smooth from the wear of the ocean.  One thing that was exceptionally cool was hearing the rocks as the rolled against one another when the waves would come in and out.

That night was a lovely night.  We went back to the tent and went to sleep in that quiet.  The next morning we woke up broke camp and drove down to the entrance to Sand Dollar Beach so we could spend a little bit more time there.

PCH - How one imagines it

After spending the night at Leo Carillo we had to pack up and get back on the One pretty quickly.  Our next stop was Plasket Creek and according to the internet sites we looked at this was the only camping area where you couldn't make reservations.

It was a bit of a drive and we didn't know how long it would take us so we didn't get to spend any time on the beach at Leo Carillo.  And actually this turned out to be a good day to be traveling because DANG it was windy!

Here is where the story of our trailer coming off the hitch comes into play.  (At least I think it was here.  Ty can correct me if I'm wrong).  We got hitched up and ready to go.  As we pulled onto the highway Ty said that he had a surprise for us that he wanted to show us.  But he wouldn't tell us what it was.

We pulled onto the PCH and drove a little ways up the coast and then Ty took an exit.  He had found an "Ormond Beach" online and we were going to try and drive to it.  As we got off the highway there was a little jolt from the trailer but we didn't think too much of it.

As we came down to the bottom of the off ramp and came to a stop there was a bigger "jolt" that we couldn't ignore.  I hopped out of the Durango to go check things out and the trailer had come completely off of the hitch and slid up onto the bumper!

We were SO very blessed that it didn't come off as we were driving.  It came off, honestly, at the best possible time. The exit that we had gotten off on was a pretty quiet one and there wasn't any traffic.  We were able to get it back on pretty quickly and just as we were finishing up a highway patrol officer got off of the freeway and pulled up behind us.  He got out of his car and came up to check and make sure that everything was okay.

Seriously, the whole situation could have (and would have) been so much worse if we hadn't decided to take that little detour.  After hooking everything back up we proceeded on to try and find our beach.  Unfortunately we were unable to get to it so after a little side jaunt we hopped back on the PCH and headed up to Plaskett Creek.

In between Leo Carillo and Plaskett Creek are many stretches of the 1 that you envision when you think of driving up the Coast.  So without further ado...pictures of the beautiful California coast.

*most of these were taken from within the vehicle because of time constraints and the wind we did not make many stops along they way for pictures. 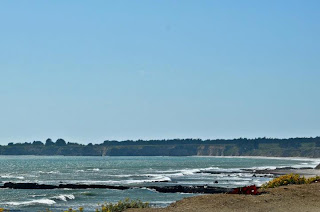 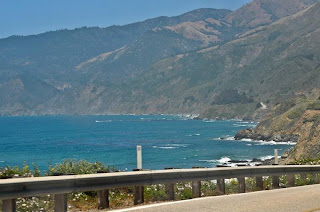 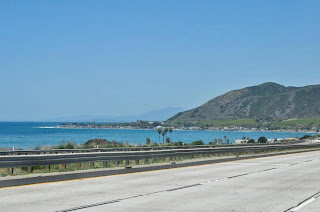 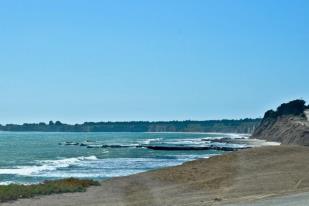 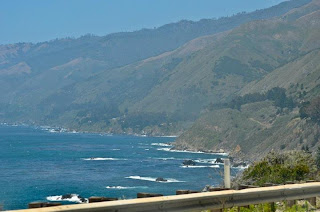 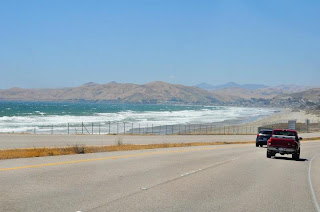 Along one of these stretches was an area where you could stop and view elephant seals but it was too dang windy!  We were able to catch a glimpse of those huge beasts from our car though.

The next installment will be Plaskett Creek and Sand Dollar Beach.