My son works for a market research company. That means he called you yesterday to ask you to take survey, nothing more. He was only doing his job. I realize that you don't want to be bothered. I get that really I do, especially on a Sunday afternoon. You made that clear by telling my son that he shouldn't be calling on a Sunday because it was a sacred day. My son apologized and you then proceeded to berate him by telling him he was worthless, and that his job is stupid, all punctuated by lovely profane and very un-sacred words. To top it all off you told him "Go kill yourself."

My son was already feeling bad because the call he that he had just finished was a lady that thought my son was her brother calling. Their mom had just died. She started talking to him like he was her brother and she broke down crying telling him "Mom's dead." My son apologized and had to explain that he wasn't who she thought it was. He told her that what he was calling about was irrelevant and apologized again, he felt horrible. He knows what it is to lose people he loves.

Then he got connected to you.

Let me tell you about my son. He is working at this job so he can earn money to be able to go on a trip to Europe at the end of his Senior year in high school with his AP art class. He loves art and has a talent for drawing. He loves camping and hiking and air soft. After graduation he wants to go to college and work in outdoor recreation. He is funny and bright. He has a tender heart that cares and feels things very deeply.

He also struggles with depression. He has had thoughts of suicide and has made at least one attempt. We have been working hard with him to get him to a place where these feelings are manageable. He ended up having to leave work early yesterday because of the things that you said to him. His supervisors were on the line and heard what was said. They told him that yours was the most brutal call that they have heard come through.

When my oldest son (who has autism) heard what had happened he was very angry and wanted justice. We tried to explain to him that really, there was no way that justice could be served. He was so angry.

I am I angry? Yes.
Am I sad? Yes.
Is there anything I can do about what happened?
No, not really.

I have to tell myself that maybe you were just having a bad day. You are obviously a very angry man and it's very possible there are bad things that have happened to you in your life that have made you this way. Maybe the only way that you can feel good about yourself is to tear down a 17 year old kid who randomly called your house and tell him he should take his own life.

I feel sorry for you. Your life cannot be a happy one.

I hope and pray that you can find some peace. That maybe one day you will be in a place where you don't need to belittle others. That if another call comes through on a Sunday that you can ignore it or just hang up instead of trying to bring others down into the vile darkness where you now reside.

As for me and my son? I will continue to let him know that he is needed here on this earth. No one else can take his place. That he is loved and incredible and important. As we all are.

(Oh you don't have one of these corners? It's just me?)

It is a corner that I turn when I am looking back on my life and wondering if I have made the best choices. I don't like making that turn. I know it's not healthy to do so. I should be looking forward. Moving forward. Not turning back towards the past.

Yesterday I came to that corner. And was able to walk right by. There was still an urge to look down that street that the corner leads to but I didn't even look. I just held my head high, my gaze forward and kept right on going.

My life is good.

It's hard but it's good and I love it.

I love the people in it.

And I don't need to go back anymore.

It would seem that I have turned a new corner.

How Did She Do It?

How did she do it?
Giving birth to her first three children in three years. The beginning of bringing eight children into this world. Having a breakdown after that third child came along.

How did she do it?
When she was seven months pregnant with her seventh child (me), getting the call that dad had been an explosion and had been badly burned on his hands and face. Helping him recover and make it through, giving birth not long after the accident and dealing with a newborn baby the whole while.

How did she do it?
Getting up before dawn every day to make sure dad had a good breakfast before he went to work and packing him a lunch in his black metal lunch box.

How did she do it?
Making bread from scratch every Saturday. And scrubbing a linoleum floor on her hands and knees. A floor that had holes in it, so that the house would be clean for the Sabbath day. 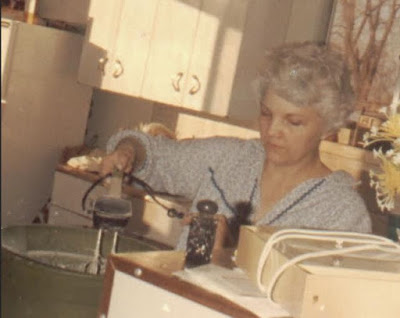 How did she do it?
Milking cows, weeding the gardens, snipping beans, pitting cherries, canning fruit and vegetables, making endless peanut butter and honey sandwiches for the many mouths of her children as well as their friends. Cooking dinners from scratch every night.

How did she do it?
Spend endless hours in hospitals and emergency rooms and waiting rooms as dad went through one medical procedure after another. (I think he had 15 major surgeries)

How did she do it?
Sleeping on our couch for years and years because it was too difficult physically for dad to share a bed and there weren't enough rooms for her to have her own.

How did she do it?
Watching her children make mistakes and choices that caused heartache and pain. Having one run away from home at 15. And have others spending time in jail and prison.

How did she do it?
Make every one of those eight children feel like they were the favorite and the most important. And letting them know that she loved them no matter where they were or what choices they made.

How did she do it?
Mixing up sourdough pancakes for the amazing Fourth of July breakfasts. Cooking chili and packing a weeks worth of food for deer camp.

How did she do it?
Bury her husband, a daughter and her mother within a few short years.

How did she do it?
This question has been playing over and over in my mind as I have been faced with my own trials as a mother. Especially these last two years since she's been gone.

I haven't been able to ask her but I think I know how she did it.

Let me tell you.

She did it in white tennis shoes.
Those shoes took her on walks around the neighborhood and up to the pulpit in sacrament meeting to share her testimony. 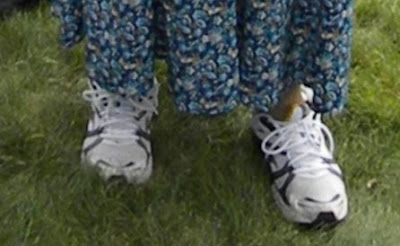 She did it on her knees.
Often kneeling by the couch  that was her bed or the recliner in the front room. There were many times that I would come in to the living room to find her on her knees speaking to her Heavenly Father seeking guidance and direction.

She did it through searching the scriptures.
Oh how she loved the Book of Mormon! Her copies were well used and worn and marked lovingly with tear stained pages.

She did it through temple attendance.
Serving in the temple both as a temple worker and as a patron. She loved attending the temple. One of my fondest memories from childhood is watching my mom ironing her temple clothes and the reverence she showed while doing so.

But mostly she did it by relying on the Savior and His Atonement and by doing her best to follow in His footsteps, wearing those famous white tennis shoes.

She did it with an all encompassing  love.

Her love for everyone and everything came shining out of her face. Her eyes. Her smile.

That is how she did it.

I am forever grateful for that love. I miss her every day but I still can feel her love. It sustains me and carries me forward on those difficult days when I ask "How can I do this?"

I can do it with love.

And so can you.